It’s Monday, and I’m here to  (hopefully) add a little humor to your day! Remember a year or so ago when it was trendy on Facebook to make fun of T-Rex’s? Or, more specifically, to reference the awkward and seemingly useless T-Rex arms?  People dressing up in T-Rex suits or getting friends to inadvertently “do T-Rex arms” by jumping out and scaring them was remarkably popular. Well, I’m doing my best to bring back the T-Rex trend!  At least on the individual level.

Not to wear out an already tired topic, but the main reason I haven’t made many public appearances yet, is…surprise…brains take a long time to recover! My brain is fantastic with generating sometimes bizarre – and usually undesirable – reactions to being placed in an overstimulating public environment. One of its old tricks that has made a recent comeback is (drumroll please!) T-Rex arms. For those of you who might be more technically-minded, my version of T-Rex arms is actually a neurological response called posturing, which can be summarized as “an involuntary flexion or extension of the arms [or] legs, indicating severe brain injury.” Since my family has been kind enough NOT to photograph me during a T-Rex moment, I added the picture at the top to give y’all a visual aid. 😉 One funny component about these incidents is that besides being involuntary, I also am usually not even aware that I’m doing it until someone tells me. Thus, the humorous (well, at least after it was over) incident below:

Last week Mom was taking me to therapy in the afternoon, but we both decided we wanted coffee since we were running early (shocker!) and didn’t want to sit in a waiting room forever. Mom suggested I try to go in with her since 2 pm is not a peak coffee time, and short excursions to quiet places are actually part of my therapy homework. So I followed her inside, feeling pretty optimistic since we were only ordering to go and probably wouldn’t be there for more than 5 minutes.

Me: takes deep breaths and finds a point on the counter to focus on.

Mom, after a couple of minutes: “Umm.. can you stop doing that?”

Behold, a perfect set of T-Rex arms!! After leveling a determined glare at my right arm, I succeeded in forcing it back down to my side after a couple of minutes, but unfortunately my left arm was less  obedient and remained stubbornly glued to my chest. Our coffees happened to be ready at that precise moment, however, so we made a prompt exit and Mom gently pulled my left arm down outside. Looking back, I have no idea how bizarre we must have looked if anyone happened to be watching, but thankfully neither of us was pondering that at the time.

The good news is that T-Rex arms don’t hurt me in any way: they’re just a bit odd, definitely awkward, and sometimes embarrassing.  Also, unlike some other classes of patients, I’m blessed that mine only make cameo appearances under certain conditions, rather than being permanent. So for now, my current philosophy when trying to go out is: 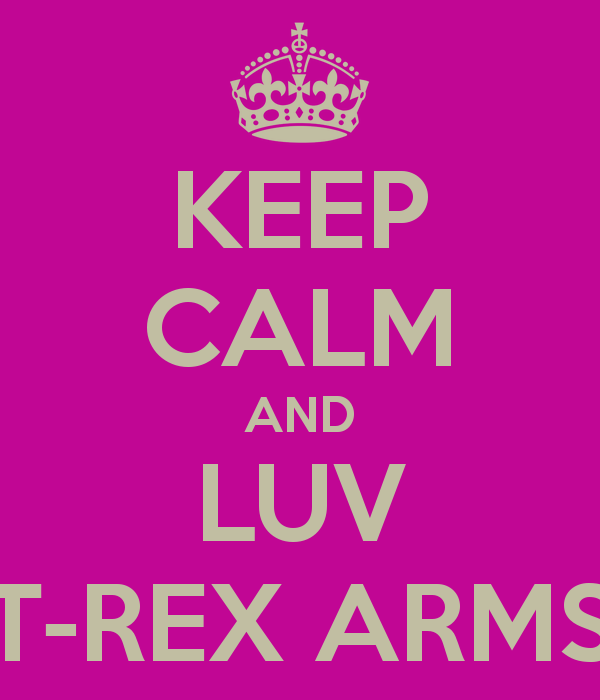 5 thoughts on “When your brain does T-Rex arms..”

This is a text widget, which allows you to add text or HTML to your sidebar. You can use them to display text, links, images, HTML, or a combination of these. Edit them in the Widget section of the Customizer.